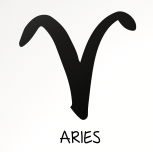 Sometimes there is a bit of “fire and water” type chemistry that causes opposites to attract but generally Aries and Pisces just get on each other’s nerves.

The Fish sees the Ram as being disloyal and the Ram sees the Fish as being a “navel gazer” who does not get much accomplished.

Sex may be all that these two have in common so the relationship usually does not last long.

The pioneering and adventurous Aries spirit can be very exciting to the easy going Pisces.

The calming safety of Pisces can be a perfect respite when Aries needs someone to understand why they are so determined and adventurous. On the other hand, Pisces are not nearly as driven as Aries which can cause problems for either.

Essentially, if Aries wants to be happy, Aries needs to be first and best.

Somehow, some way, Aries need to find a competitive outlet. Pisces may need for Aries to cool it from time to time.

Aries begins life with the question posed to every solar super hero, "How will you use your super powers?"

The stars dare Aries to be a pioneer, a champion and a doer.

Sexually, Aries has got some naturally hot stuff. Naughty Pisces may find that's enough to keep them interested, at least initially.