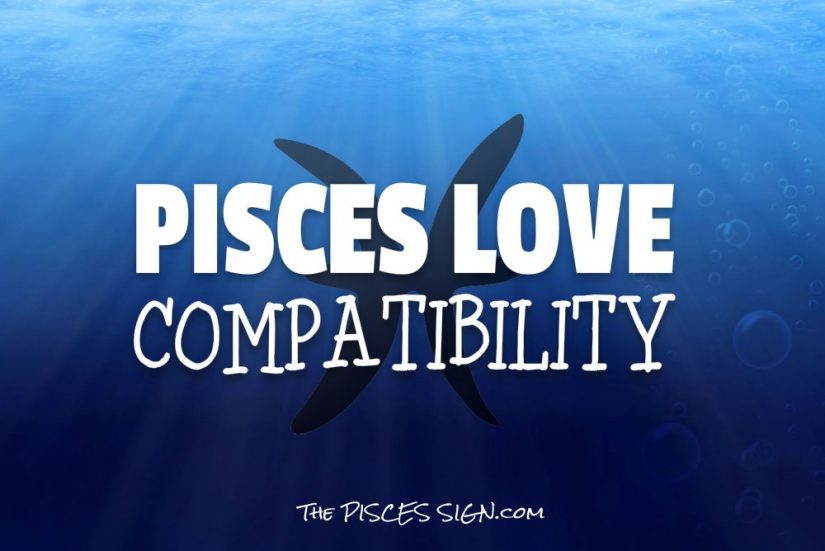 Moody and deeply affected by their surroundings, Pisces can be like water – fluid, ever changing, tidal.

Many a Pisces spend much of their life searching for their perfect mate. Such high expectations can feel very intense to other signs that are not as in touch with their emotions as tender-hearted Pisces.

Pisceans thrive on positive attention and displays of affection.

Simple things like a post-it note on the fridge or hidden in a briefcase or purse are exquisite to romantic Pisces.

Pisces prefer being close to their partner every day, but also need their space.

Loving a Pisces sometime feel intense for those with commitment issues. However, Pisces also require space for themselves so they can retreat into their world of fantasy, and that is usually a solo mission.

Let’s take a look at how Pisces match up with other Zodiac birth signs in terms of dating and general compatibility:

Sometimes there is a bit of “fire and water” type chemistry that causes opposites to attract but generally Aries and Pisces just get on each other’s nerves. The Fish sees the Ram as being disloyal and the Ram sees the Fish as being a “navel gazer” who does not get much accomplished. Sex may be all that these two have in common so the relationship usually does not last long.

Both of these signs love to argue and bickering may be a favorite form of foreplay. However the sex may not be that great as usually a lot of drinking, recreational drugs or other escapist behavior is required before the act can take place. If these two end up together it is usually because of some very practical need because basically they can’t stand each other. This relationship is also subject to meddling and interference from relatives.

Both of these signs are at their best when they are twinned happily with a partner. Although there is some sexual chemistry the Gemini usually finds the Pisces way too serious and dramatic to stand. The Pisces however is often fascinated with the free-spirited Gemini that in the end only provokes jealousy and suspicion. A mutual interest in the occult or religion can sometimes draw them together. These two are better off being friends rather than lovers.

These two water signs are compatible in every way and if they can avoid being too dramatic then they could blessed with a very happy marriage. The problem is that the relationship is primarily ruled by emotions and not common sense. This duo makes for a better one night stand or affair then marriage with children. Another drawback of this relationship is that they often get lost in their own little world, which often results in financial and career setbacks.

This can be a very powerful because opposites attract but these two signs are basically not that compatible. Both have strong egos so power struggles are bound to happen. It also doesn’t help that both signs have hair trigger tempers and take things very personally. This relationship is best for a one night stand or short affair. Marriages don’t tend to last long as both parties tend to view the other as being too selfish and disrespectful.

Both of these signs are obsessed appearances, which makes them quite compatible. However the Virgo may find the Pisces need for spirituality and meaningful experiences to be impractical. On the other hand, the Pisces native may see the Virgo as being too rigid and unimaginative. These two do not make very good spouses and are better off as friends or business associates.

The obsessive and heavy Pisces nature is just too heavy for the free spirited and casual Libra. A Libra can make a Pisces feel very insecure and jealousy can develop as a result. These two can also be very critical of each other and arguments that go in circles are likely. This is not a great combination for friends or lovers however they can be very good together when it comes to brainstorming for creative reasons or analyzing a problem to find the best possible solution.

This is usually a very unique, soulful relationship that is characterized by great sex. This pair is too intense to last long. If it does break up it is very difficult for one or the other partner to get over it. These two may share an interest in the occult, religion or mystical matters. Despite good intentions, this relationship is often destroyed by fighting and broken promises. These two are difficult soul mates that are destined more for karmic lessons then a lifetime as husband and wife together.

These two signs have a lot in common intellectually and culturally but contempt soon sets in when they get bored with each other sexually. The Sagittarian tongue is also too sharp for the sensitive Pisces who often mistakes wit for criticism. The Sagittarius may find the Pisces tendency towards drama to be meddling and self-centered. Both signs have a mutual love of literature, poetry and art that could create a long lasting friendship.

These two signs are often connected through a mutual interest in religious, philanthropic or mystical matters however they are not that compatible emotionally. The Aquarius need for psychological and physical space will just frustrate the Pisces who needs a lot of physical contact to feel loved. These two are also often separated by distance or strange twists of fate.

True loyalty exists when two fishes get together. When paired they are a power couple that can accomplish almost anything but their main interest in each other will likely to be to produce as many children as possible. These two are highly compatible with mutual tastes for adventuresome coupling. However they can get so close, that they run the risk of alienating everyone else in their lives.