Pisces make fantastic musicians because of the uniquely creative and artistic nature. 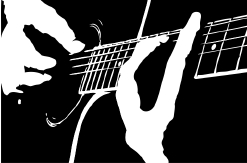 Some of the world’s greatest musicians are/were Pisces.

By trusting their natural intuitive ability to read people and situations, Pisces musicians are especially adept at improvisation and “jamming”, where their inventive, free-flowing creativity can truly shine.

To a Pisces musician, sitting in with a new group of players and just letting go is the ultimate musical experience.

Even those Pisces who don’t play musical instruments, have an innate love and vibrational harmony with music.